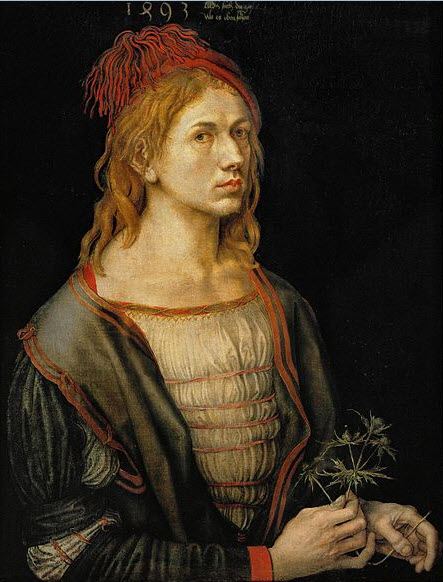 DURER, Albert, the father of the German school of painting, “the prince of artists,” as his countrymen loved to call him, was born at Nuremberg in 1471, according to an entry in his father's day-book, “on the day of St. Prudentius, on a Friday of the holy week.” His father was a humble pious goldsmith, of whom the great painter says: “His daily speech to us was, that we should abound in love to God, and act faithfully towards our neighbor.”

Durer was carefully educated and instructed by his father in the goldsmith trade, and at 15 executed a piece of work in chased silver representing the “seven falls of Christ” -- in reference to the tradition that Christ fell seven times while bearing his cross to Mt. Calvary. Even as a child, drawing was his delight, and he was wont to astonish by the exactness with which he drew parts of the human body, and even whole figures, also lines and circles at the first stroke, without ruler or compass.

His father therefore bound him apprentice, in 1486, to Michael Wohlgemuth, the chief Nuremberg artist, with whom he served three years. From 1490 to 1494 he traveled in Germany and the Venetian states; and on his return, his father bargained with Hans Frei, a skillful mechanic of Nuremberg to give him to wife his daughter Agnes, who turned out a perfect Xantippe (the foul tempered wife of Socrates), with nothing to recommend her but beauty and 200 florins, who embittered the whole course of his life, and, as his life-long friend Pirkheimer asserts, hastened his death.

After receiving his diploma with all the honors and rights of a master, obtained for his famous drawing of Orpheus, Durer went to Venice in 1505, where he painted a picture of the martyrdom of St. Bartholomew, and one of Adam and Eve, afterwards bought for the gallery at Prague. He also visited Bologna, where it is said that he met with Raphael, who esteemed him highly, and that each painted for the other his portrait. After this journey, his fame spread widely, and the Emperor Maximilian appointed him court painter, with an annuity of 100 florins; and Charles V. confirmed the same in a document still to be seen in the Nuremberg archives.

In 1520, Durer visited the Netherlands with his wife and their maid-servant; and they were splendidly entertained at Antwerp and Bruges by the painters, a costly dinner being served on vessels of silver, the whole party conducting them home late in the night by the light of many torches. His expenses were often defrayed at the inns, and he was escorted free from city to city. He says in his journal, “The people did obeisance unto me as if they were leading some great lord.” Durer warmly embraced the doctrines of the Reformation; and his journal contains a long lamentation and prayer on hearing that Luther had been carried off to the castle of Wartburg. At Antwerp he records: “I was now overcome by a strange sickness, of which I never yet heard from any man.”

This was in 1521, and the “strange sickness” -- most likely consumption -- took yet seven years to consume his strong frame; Durer died in his native city, 6th April, 1528, in his 57th year. 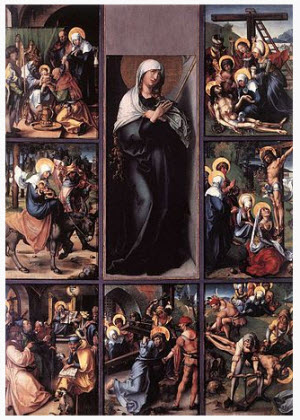 “Durer's facility was almost incredible. He thought out his works, and then executed them without sketch, and never altered a line.“ Of his coloring, Fuseli says: “Durer excelled Raphael in juice and breadth of coloring as much as Raphael excelled him in every other quality.” His drawing was perfect. So quaint were the presentments of his genius, he may be called the Chaucer of painting. In his portraits* he not only caught the expression, but delineated character and passion. Durer was the inventor of the art of etching. He found wood-engraving in its infancy, and raised it to be a pattern for all times; he also discovered the method of bringing out wood-cuts in two colors. Historical and other paintings by Durer are to be seen at Vienna, Munich, Prague, Dresden, and Nuremberg. The oldest of his pictures extant is the portrait of himself of the year 1498, in the Florentine gallery. His engravings and wood-cuts are so numerous, that with all his surpassing diligence it is known that for many of them he only gave the designs: 262 wood-cuts are known marked with his name, the most famous of which are the Great Passion, the Little Passion, his favorite work, the Revelation of St. John, and the series called the Triumph of Maximilian, a copy of which is in the Advocates Library in Edinburgh. In the British museum, there is a volume with more than 200 original drawings by Durer, formerly in the collection of sir Hans Sloane, also an exquisite carving in hone-stone, of the birth of St. John, and a number of engravings, bequeathed by Mr. Nollekens. Durer's own list of his works enumerates 1,254 pieces.

In the last three years of his life Durer published works on perspective and measurement, on fortification, and on human proportion, of which last he only lived to correct the first volume. His life has been written by Heller, Roth, Campe, and others; in English by W. B. Scott and Mrs. Heaton. Deeply religious and reverent, he was also of a cheerful temperament, and was long chief magistrate of his native town, where there is a brass statue of him, designed by the famous sculptor Rauch, and his house is still to be seen at the corner of a street called by his name.